The newest member of the Black family!!!

Well, it finally happened. In November 2011 I got my first pony!!

Yay! After almost 25 years of riding and working with horses, I finally have one to call my own!

It may seem unlikely on the surface but I couldn’t be happier. 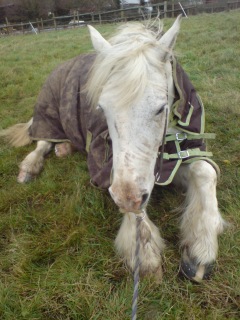 This is my pony.

You may remember a few posts ago I wrote about a horse we had in for sale at the yard I work at, well, this is her.

We had a few people try her out, but she’s so darn clever, she would figure them out straight away.

She’s an angel really, she just has a sense of humour which needs to be appreciated…..

I have always enjoyed riding her and found her antics amusing.

So after a few people came to try her, the previous owner couldn’t keep her anymore, so after a small begging session to my husband she became mine.

When she first came to us to be brought back into work, as she’d not been ridden for about 18 months, she weighed almost 500kgs!!! Which is a disgusting weight for a 14.1hh pony!

So after careful exercise and feeding, she now weighs a slender 420kgs…. still has another 20kgs to lose, as she’s still a bit cuddly!

Being a Highland pony, she is, well, built! She has huge shoulders and there is as much in front of the saddle as my friends Clydesdale cross!

Highland ponies were originally bred to carry fully grown men and dead deer down from the hills… they are said to be able to carry up to 20 stones!! Thankfully I weigh nothing near that, but you get my point.

She’s as light as a feather on the hand until she wants to mess about or gets startled, then she pulls like a train.

She is led in a chifney. 9 out of 10 times she doesn’t do anything, but when she wants to go, even in the chifney, there really isn’t much you can do about it!!

Thankfully though, she has a kind heart, and now, the only time I have any of those troubles is when something spooks her. 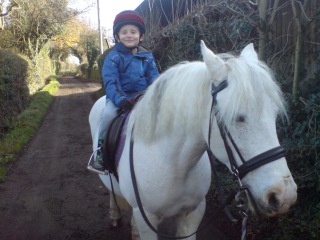 This is my 5 year old son riding Bonnie. She does a wonderful job of looking after him and has been a total angel. She even does that lovely slow trot you want for little ones!

It’s a good job he’s tall though, as she is rather wide!!!

The biggest job of course, as with any grey horse, is keeping her clean. She does love to roll in mud and sometimes, as my son points out, resembles a hippo…. 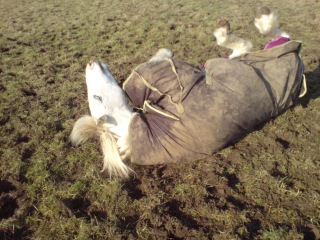 Here is Bonnie doing what Bonnie loves doing best…. rolling…. she loves being covered in filth.

I tried her with a Snuggy Hood but they just kept slipping and to be honest, the consequences of that are just not worth it. I’d rather have a filthy pony then an injured or dead one. 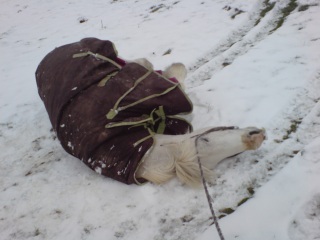 Oh look! Another rolling picture!! In this one, she just couldn’t wait to get into the field before rolling, it’s a good job I have a lovely long lead rope for her!!

So, it’s turned out well, she’s safe for my son to have a walk round on, although I wouldn’t let go of her!! LOL!!

She’s also proving to be pretty darn good and is picking everything up very quickly.

We have our first dressage competition in March, which I’m really looking forward to. We’re doing Prelim 7, which I thought would be a nice one to start with.

I have competed before, but not for a long time and of course on other peoples horses….

I love to be active! I love to spend time with my son and husband. I'm self-employed and work whilst my son is at school and weekends when my husband is home. I enjoy drawing but don't have much time for it at the moment. I also enjoy cooking, baking and gardening. I'm on Twitter @pinwingirl if you want to find out more.
View all posts by crispy80 →
This entry was posted in Uncategorized. Bookmark the permalink.