Hello again and welcome. Here is a brief update on things occurring with us here in the Black household. 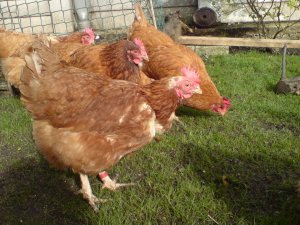 It was a very warm Autumn, then a strange winter with not much rain, not very much snow (boo!!) and now we have rain. Lots and lots of rain.

Being in drought of course means, that all this rain is just sitting on the surface and we need an awful lot more for it to actually soak in and make a difference.

But until that happens, we have mud…. lots of mud.

Our hens are very lucky and have a lovely covered pen to stay in when the weather is really nasty. I and they don’t like being out in a howling gale and I think it’s just safer if they stay undercover.

They have a solid nylon roof with clear plastic sheets around the outside, so they can still see out but the weather can’t come in.

The doors are left uncovered with just the chicken (sort of) wire, so there is plenty of room for air to circulate.

Being protected like this, means our girls always have some dry soil to roll in and some dry land to stand on!

But thanks to this deluge of rain (lucky, as we have a hosepipe ban currently) my plants have been doing very well! Only this morning, I picked 8 lovely radishes from the veg patch. I don’t think it’ll be too long till some more are ready.

The gooseberry bush is bursting into life and the new grass seeds I planted for the girls have produced a lovey lot of grass for them. Their eggs are amazing when they’re out on the grass all the time and it makes them even happier!

We only have 6 hens now, after the sad death of Mel. I’ll do her a whole post when I can, but it still upsets me to think about it. She was a hen in a million. A huge gap has been left behind, but the others now seems to be OK. Crispy was a bit depressed for a few days after Mel died, but she seems back to normal now.

Here are some of the girls in their usual place, camped outside the cat flap. Just to remind me that they are staving to death and require feeding constantly.

Bonnie and I, have been having lots of fun too. Mostly dodging rain storms but we’ve built up our bond together and really trust each other now.

She’s amazing and she loves to work. I think her worst nightmare is standing around doing nothing! Although when she starts yawning when you’re tacking her up, it can be hard to believe!

This is us at our second dressage competition. She was much better behaved and a lot more relaxed than the first time. We got 62% which wasn’t quite good enough to be placed (first place got 80% and then second & third were in the 70’s) but I’m very pleased with her. 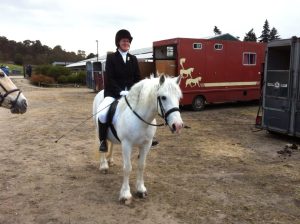 Here is Bonnie and me at a riding club dressage competition.

My pony is also feeling the spring time and has been having lots of ‘fun’ when we’ve gone out for hacks.

She likes to decide when she wants to ‘canter’ and does often try to run off when she thinks it’s time….. she’s a lot better than she used to be.

I started off by trying her in a pelham (which her owner said she’d been ridden in before) but as she’s only strong occasionally, I found it too much.

So, I tried her in a Waterford snaffle. Amazing, I love this bit, she loves this bit and I can stop her running off! They may look a bit scary but in sympathetic hands, it’s perfect. Not really suitable for schooling, in my opinion, as it doesn’t really allow for a consistent contact, but as a ‘don’t lean on me and run off’ prevention whilst hacking/jumping, it’s perfect.

She has a very large mouth with a large tongue and so she seems to find the copper lozenge more comfortable than a plain french link.

I’m hoping to get her out to do some jumping, but with the weather as it has been, the ground is much too slippery and the last thing I want is an injured pony.

Frank (the Land Rover) is running very well at the moment. He now has a radiator muff on (with an open flap as it’s not winter).

Not only does it look very smart, but it seems to help him get up to temperature more quickly and stops him cooling down quickly.

Frank is still proving to be worth his weight in gold, super reliable, sturdy, straight and just all round awesome. I never want another car and hopefully, I’ll never have to have one!

The cats are all fine. They’re all in their summer coats now (judging by the state of the carpets…) and all looking very well & content.

Poppy has settled right in and has her own space to sleep in. There is still a bit of tension between her and Miew but nothing more than he gives our other female cat, Spice.

Our son is just about to have his 6th birthday. I can’t believe how quickly all that time has gone. It doesn’t seem that long ago, he was small enough to cradle with one arm, now, he’s more than half the height of me and I’m 6ft tall!!!

So all is well here.

I hope everyone is enjoying the spring. Remember, we need the rain, really we do!!

I love to be active! I love to spend time with my son and husband. I'm self-employed and work whilst my son is at school and weekends when my husband is home. I enjoy drawing but don't have much time for it at the moment. I also enjoy cooking, baking and gardening. I'm on Twitter @pinwingirl if you want to find out more.
View all posts by crispy80 →
This entry was posted in Cats, Chickens, Family, Garden, Hens, Horses, Land Rover and tagged chicken, garden, grass, hen, horse, Land Rover, pelham, pony, radishes, spring, waterford. Bookmark the permalink.